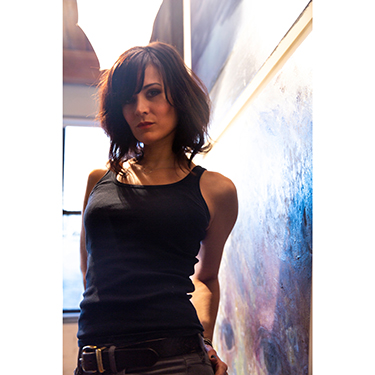 Alyssa Monks' work is represented by Forum Gallery in New York City. She lives and paints in Brooklyn. Her latest solo exhibition “Breaking Point” was held in October of 2018 at Forum Gallery. Monks’ paintings have been the subject of numerous solo and group exhibitions including “Intimacy” at the Kunst Museum in Ahlen, Germany and “Reconfiguring the Body in American Art, 1820–2009” at the National Academy Museum of Fine Arts, New York. Her work is represented in public and private collections including the Savannah College of Arts, the Somerset Art Association, Fullerton College, the Seavest Collection, The Bennett Collection, and the collections of George Loening, Eric Fischl, Howard Tullman, Gerrity Lansing, Danielle Steele, Alec Baldwin and Luciano Benetton. In 2015, Alyssa gave a TED talk at Indiana University discussing her recent work, which is featured on TED.com. Recently, she was named the 16th most influential women artist alive today by Graphic Design Degree Hub. Her work was featured extensively in season 6 of the FX television series The Americans in 2018.

Born in 1977 in New Jersey, Alyssa began oil painting as a child. She studied at The New School in New York and Montclair State University and earned her B.A. from Boston College in 1999. During this time she studied painting at Lorenzo de’ Medici in Florence. She went on to earn her M.F.A. from the New York Academy of Art in 2001. She completed an artist in residency at Fullerton College in 2006 and has lectured and taught at universities and institutions worldwide. She continues to offer workshops and lectures regularly. Alyssa has been awarded the Elizabeth Greenshields Foundation Grant for Painting three times and serves as a member of the New York Academy of Art’s Board of Trustees since 2010.